Frank D’Hondt represented ISOCARP as Ambassador at the Tehran Golden Adobe Awards.
Here is his report:

With 255 projects submitted of which 183 from foreign cities, the third edition of the Tehran Golden Adobe Awards event likely benefited from last year’s nuclear deal between Iran and the major world powers, making this Persian-international award scheme one of the larger events in its kind. The event is organised by Tehran metropolitan municipality and backed by international organisations such as UN-Habitat, Metropolis, UCLG and last but not least Isocarp. The jury was comprised of 45 local and international experts in urban planning and management, choosing winning projects in seven categories. The mayor of Sarajevo, Prof. Komšić, featured as a special guest of honour – representing the country with the highest share of Muslim population in Europe.

The 2016 Golden Adobe Award ceremony – ‘adobe’ is the smallest construction unit in ancient Iranian architecture, a kind of mud-brick – coincided with the World Cities Day, yearly organised by UN-Habitat on 31 October, this year happening shortly after the Habitat III United Nations conference in Quito, where the New Urban Agenda 2016-2036 was adopted by 167 countries. Upon president Ric Stephens’ request, it was my great honour and pleasure to represent Isocarp at this event. The show-biz style award ceremony was preceded by a more technical conference with sessions on smart and resilient cities. As Isocarp representative, I presented the contours of a new city resilience approach emerging from both the New Urban Agenda and the International Guidelines on Urban and Territorial Planning – for which I’m currently drafting the application manual. I also took the opportunity to promote Isocarp as a unique planning professional body that can help deliver the NUA/IGUTP through the means of our learning network and the UPATs and YPPs in particular. During the lunch break I was interviewed by Iranian media to further explain my points of view, our organisation and my (first) take on Tehran and the Iranian people – testing my diplomatic skills to strike a balance between commending and hinting to policy changes to approximate the current metropolitan trend of super-blocks separated by super-highways with the NUA’s call for walkable and integrated mixed-used mini-blocks – albeit in more plain language…

After introductory messages and notes from local and international senior representatives, a total of 24 projects were awarded, including 9 ‘golden’ trophies – nearly half Iranian and half foreign urban projects and initiatives. The full list can be found on the official Golden Adobe website (https://ccia.tehran.ir). The nine premium awards compromise a reconstruction project in Baalbek (Lebanon), a public space project in Paris, a waste management project in Tehran, public parks in Copenhagen and Tehran, a city-management project in Christchurch (New Zealand), a flea-market project in Barcelona, a climate mitigation project in Berlin and a design standards project in Tehran. I hope more information on why these projects have been awarded will be added soon, as this was not available at the time of the awarding – certainly a point of attention for the next editions. Another point of attention will be to increase the visibility of women on the stage, both among the award givers and takers.

After the ceremony I was invited to take part in an informal diner-meeting at the charming premises of the Asian Mayor Forum, hosted by its Secretary-General, a former Iranian diplomat. I always prefer informal to formal meetings as more open-hearted discussions often emerge, as in this case – in particular the difficult if not broken balance between local history and global aspirations of Tehran, a fast growing metropolis with tantalising traffic jams and health-impeding air pollution. The meeting also offered good networking opportunities with Metropolis and the World Citizens Organisation.

The following day Tehran municipality offered a city trip along old and new districts, including a stroll through the truly unique human-scale bazaar in the city centre, a visit to one of the many holy shrines, a long drive over freshly asphalted highways to an artificial lake and park in this arid city at the western edge of the city – incrementally surrounded by high-rise apartment blocks and ‘the biggest shopping mall in the world’ under construction. From there we were driven and ‘uplifted’ to the sixth-tallest telecommunication tower in the world – with a stunning 360 degrees view over the sprawling metropolis and its clogged main arteries. It came as a welcome surprise to end the tour with a refreshing visit to the bridge of nature or Tabi’at bridge, the largest pedestrian overpass built in Tehran and probably far beyond, designed by a 26 year young female Iranian architect-urban designer – once more indicating Iranian woman are indispensable for making Iranian cities more green, walkable and liveable. The tour was concluded with an excellent dinner at a traditional Persian down-town restaurant, joined by all senior staff of the Tehran municipality and the mayors of Sarajevo and Baalbek.

Day 3 started with a meeting at the UN-Habitat office in Tehran and ended with a meeting with three female representatives of the Iranian Society of Urban Planners. The young and dynamic local UN-Habitat team expressed interest in cooperating with Isocarp and Iranian planning professionals on the promotion and implementation of the NUA/IGUTP, in particular at local level and across the urban-rural continuum. This could be further explored by the Isocarp leadership. The inspiring talk with with the three passionate female planners of the ISUP matched perfectly well with the previous one and looks promising for future professional cooperation and partnerships.

In conclusion: this type of events clearly shows that learning woks best if applied in multidirectional ways: we can learn as much from Iranian planners as they can learn from foreign planners. The NUA provides a promising platform to reconcile global and local goals and ambitions for a better urban and territorial future. And last but not least: the Iranian/Tehranian hospitality is unlimited and by moments overwhelming! 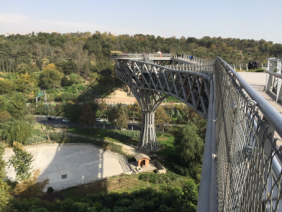