This is an ISOCARP Congress with a difference. It is a festive occasion, as ISOCARP is celebrating its 50th Anniversary and it will be a proud moment to highlight ISOCARP’s achievements over the last 50 years.

A group of Dutch ISOCARP members were eager to host the 2015 congress in the Netherlands in the innovative spirit of Sam van Embden and his colleagues. They had founded ISOCARP there in 1965 as an opportunity for likeminded planners to share knowledge and lobby for the planning profession well beyond the Netherlands. They thereby laid the ground for a Society which now comprises hundreds of members from over 80 countries worldwide.

Planners are not alone in facing the challenges of climate change, rapid urbanisation and land flight, migration and displacement, spatial and social inequalities and need to join forces with many others. In a globalising world cooperation with others across borders, across professions and across cultures is essential. ISOCARP intends to work more closely with its institutional partners and strengthen networks between institutions and their constituents as the basis of further cooperation. All those who wish to share their knowledge and experiences are welcome to the city workshops and congress debates. The 50th anniversary congress offers convivial settings for that to happen.

In the true tradition of ISOCARP, the 2015 congress will once more be at the forefront of planning issues with worldwide resonance and open new avenues for knowledge creation and sharing among members with the wider planning community. The radically different format of the congress is putting into practice cooperative and decentralised planning promoted in ISOCARP’s motto Knowledge for Better Cities.

A broad range of activities will offer the diverse ISOCARP membership and other planners from all parts of the world many different opportunities to contribute and to learn. There will be many informal events where participants can network and have fun. Special attention is attributed to the Young Planning Professionals who will be invited to take an active part in all the congress events and organisation. They are already actively involved in the interactive ISOCARP2015 Platform, to which participants are invited to contribute from now on.

The Congress takes off in the 12 participating cities with two days of interactive workshops. Each city is proposing its own theme. Participants will choose which themes correspond to their own interests and expertise and how they intend to contribute. They have a choice between preparing papers, case studies or projects relevant to the workshops themes. In the spirit of friendship, participants are offered to stay with local members if they wish or in hotels. Assistance will be available at the railway stations.

On the morning of the third day, the participants will travel by train to the venue of the plenary part of the congress in Rotterdam. They will be met at the Central Station and taken on an ‘Urban Safari’ across Rotterdam to the refurbished Submarine Wharf in Docklands. Feedback will be produced on all 12 city workshops, and at a Mayors’ Summit the key issues will be shared between politicians and planners. International experts will initiate formal and informal reflections with the participants from their cutting edge point of view. In cooperation with the co-rapporteurs, the General Rapporteur will prepare a synthesis of the congress activities to the plenary with a Minister invited to respond. All planners are encouraged to pledge personal engagements at the debate on ISOCARP’s future. At a matchmaking session participants will be able to explore common professional pursuits and business interests. Fun parts will complement these interchanges and technical congress tours are also on the menu. The aim of the congress is to generate a dynamic momentum of cooperation and interaction already on the interactive ISOCARP2015 Platform before the congress and to continue the momentum by using the outcomes of these exchanges as contributions towards future planning events, such as the UN Habitat III conference on Housing and Sustainable Development in 2016, and the Urban Agenda of the 2016 Netherlands EU Presidency.

Urbanisation and globalisation have transformed cities into metropolises and urban regions while technology has contributed to shrinking space and continuously shifting centralities. Cities are recognised as the engines of national economies. They are the drivers of wealth creation, social development and employment opportunities. Cities are the choice locations of productive, post-industrial and technological progress, entrepreneurship and creativity. Current preoccupations with climate change and mass migration are constantly transforming the urban landscape. However, even sustainability driven cities remain embedded in their locality and surroundings, where they draw on resources and utilities, dispose of waste, benefit from recreational spaces and, more recently, are producing again more for local consumption, not least food which can change landscapes and ecology.

Cities can also be adverse and divisive. Polarisation between rich and poor is inscribed in urban space, pollution and congestion are concentrated in cities, and footloose economic activities can push cities into decline. Planning and its practice have to adjust to such changes outside their control, while depending on political objectives, most recently on the neo-liberal drive to austerity. Beyond purely spatial considerations all these changes require adjustments to governance, institutions or, more generally, the relation between private property rights and common interest, between the planners and the planned.

Focusing on both ‘doing’ as well as ‘reflecting’, the local organising committee approached cities, initially in the Netherlands, followed by Belgian and German cities in the region keen to join in. The 12 cities offer to host interactive workshops where professional planners can share knowledge and experiences on topics of importance to these cities, but also of global relevance. With sustainability in mind, the complementary themes of the 12 workshops are encompassing economic, environmental and socio-cultural issues. Working with cities and other local agencies provides the opportunity to attract politicians, policy makers, the business community, other professionals of the built environment, the civic society affected by the study sites, and those capable of delivering such policies on the ground. 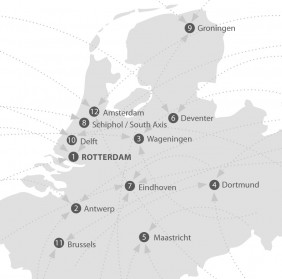 These workshops are challenging for all the participants, local as well as international. They are expected to contribute their knowledge and experience actively to these planning exchanges and cities may wish to extend cooperation beyond the workshops. In the true spirit of devolved decision making each city is free to choose its workshop partners and its way of running the workshops. In each city, a local team, comprising different types of stakeholders is in charge of organisation and content.

Regarding outcome and feedback, young planning professionals will be responsible to produce the display of the workshop results, such as large posters, (audio)visuals, and in whatever other forms they wish, in cooperation with the co-rapporteurs, the workshop participants and the local hosts. Background material on the city, the sites selected for the local case studies and any other relevant information will also be exhibited at market stalls at the plenary venue where feedback to all the participants will take place.

All the 12 themes are generic in so far as they are equally present in other parts of the world, in developed as well as developing countries. The workshop organiser wish to attract up to 40-50 participants per workshop. Details about the 12 workshops can be found on http://2015.isocarp.org and will be updated. Participants are invited to start contribution to the workshop exchanges from now on.

The grand finale and beyond

Many activities are planned for the plenary in a symbolic venue of change in the Port of Rotterdam. The plenary will culminate in a debate on “Let’s reinvent planning“. The debate led by world renowned thinkers about the economy, the environment and socio-cultural issues will provide the members with an opportunity to critically reflect on planning and the role and responsibilities of planners. Participants will be invited to explore how the planning profession may develop over the next 50 years, and what personal commitments they wish to make towards planning. These congress exchanges will lay the foundation for the next fifty years of ISOCARP, its many networks worldwide and continuation of cooperative initiatives with international agencies.

Short Introduction to the Congress

The ISOCARP2015 congress comes at a time of unprecedented global urbanization. Voices from the global level down to the ground – in both the public and private sector – are calling for a ‘planning’ approach to address the complex challenges that this brings. The congress is therefore an opportune time to open up to the…

Selected authors can upload their paper here. Detailed guidelines for papers are on pages 3 and 4 of the Guidelines for authors and invited speakers. Example ISOCARP paper. Example ISOCARP paper for peer review. Please submit your paper in PDF format. PEER-REVIEW: Please mention your ID and not your name (see example above). POWERPOINT PRESENTATION (format:16:9) Guidelines Example Deadline for paper…