The successful UTF-Sitges II, led and reported by Paco Perez Arellano (MX), ended with a regional Conference, organised by our ISOCARP Project Office in Sitges under the able coordination of its manager Alejandro Navarro. It was attended by several officials and it included a Round Table chaired by Ismael Fernandez Mejia (MX). In accordance with the Agreement with the City of Sitges, the Urban Task Forces will continue until 2010. This year‘s Sitges UTF has opened new ways for the upcoming UTFs in Sitges.

Vice President Ismael Fernandez-Mejía, UTF Project Leader, is drafting – in coordination with  Pablo Vaggione and Paco Perez Arellano – a UTF Handbook which will/should give further impetus to ISOCARP members’ UTF initiatives. Another ongoing project within the ISOCARP-City of Sitges Agreement and to be organised by the Sitges Project Office is organisation of the World Planning Day Celebration on 8 November. 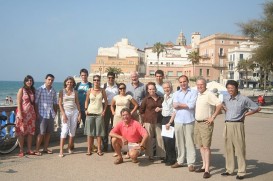 REVITALISATION OF METROPOLITAN AREAS IN SPAIN CONCLUSIONS/RECOMMENDATIONS OF THE ROUND TABLE HELD DURING THE SECOND ISoCaRP SITGES URBAN TASK FORCE, July 7, 2006

1. Faceless peripheral municipalities, like L’Hospitalet (part of Barcelona Metropolitan Area) can actually be transformed into places with an urban identity, if an urban project is put forward by the municipal authorities and the main stakeholders.
2. Such a project has to include both a vision and an investment programme, essentially made of public spaces requalification and a few iconic public buildings (in the case of L’Hospitalet, Plaça Europa, Gran Via and public buildings by Chipperfield and Rogers). The municipal investment programme can usefully take advantage of national infrastructure projects (e.g. high speed rail) crossing the Municipality.
3. The urban vision and the regeneration investment programme can usefully concentrate on culture. In the case of Bilbao, abandoned industrial spaces and railway yards have been transformed in spaces for culture, congresses, commerce and offices.
4. Institutional tools for implementation include Public-Public Partnerships, specially set up to implement the common urban vision. Bilbao’s Ria 2000 is to develop, in a coherent way, public lands owned by various public bodies. Its responsibility includes making development agreements with private developers to the common benefit of the partners. This tool is essentially different from Public Private Partnerships between public bodies and developers. These are often dominated by the interests of the private sector, which is usually to develop the best lands and leave the rest.
5. The huge value increase and surplus of the Public-Public Partnership can be utilised for public purposes. In the case of Ria 2000 the surplus is utilised on improving the deprived area of Bilbao la Vieja and its accessibility, by developing a new tramline.
6. The new spaces made available can be developed as high density mixed used neighbourhoods, as was the case in the 19th Century urban developments such as the Eixample (Barcelona) and the and Ensanche (Bilbao). This urban form is favourable to proximity access by non motorised transport as opposed to motorised commuter travel. This is the opposite of the common US practice where the density ceiling is set by the fluidity level of automobile access and is therefore uniformly low. Temptations to imitate such practices in the name of equity between land owners should be resisted.
7. The logic of high density new spaces is exemplified by the Barcelona super blocks (“Super manzanas”). Accordingly, the heavy urban traffic is concentrated along the wider avenues, while n the narrower streets within the super block, traffic speed limitations favour residential use.
8. The traffic calming and non motorised transport made possible within the super blocks also favours sustainable urban development, by saving fossil fuel, reducing noise, emissions and ozone level, improving air quality and making more space available to enjoy the city. This refers to Barrio the Gracia as it is also known the Eixample=Ensanche=NewTown of Barcelona. It does not have anything to do with “Gracious Neighborhoods”. It helps achieve gracious neighbourhoods (“barrios de gracia”).

9. The street-by-street implementation of the public space improvements calls for specialised engineering equipment designed to minimise the inconvenience for the neighbourhood‘s inhabitants, reduce the time of traffic closure and save costs.