For indepth presentation on the outcomes of the workshop please click >here (En Español).

A compilation of pictures from the UPAT Workshop Tlalnepantla can be found here>. 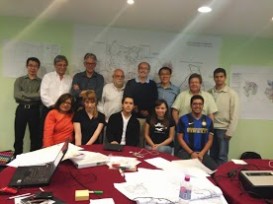 Between 11 and 19 May, an ‘Urban Planning Advisory Team’ of ISOCARP has carried out a working visit to the municipality of Tlalnepantla de Baz in Mexico. This municipality is located just north of the Federal District of Mexico City, and is part of the metropolis ‘Greater Mexico City’. The historical centre of Tlalnepantla is facing some severe problems: such as a relative decline of the economic functions, the urban quality and cultural identity of the central area; which covers more than 6 square kilometres. Amongst others the problems are caused by: the vacancy of properties in the industrial zone, the predominant private motorised traffic and the lack of a coherent vision on the future of the city centre. The municipality has asked ISOCARP to help with the first phase of a sustainable urban revitalisation process and to present an independent first diagnosis of the problems and moreover: new ideas for the future redevelopment of Tlalnepantla’s Centre. The first results of the work of the ISOCARP planning team was presented to the Mayor and directors of all municipal departments on the 19th of May.

The UPAT team for Tlalnepantla consisted of 7 members of ISOCARP with different backgrounds: architect, town planner, regional planner, landscape architect, lawyer and strategic planner. As a consequence of this, the team was able to analyze all main aspects of the plan area in a very short time, and it was possible to realize an integral approach for the plan area. Main issues of the diagnoses were: lowering of the pressure of motorized traffic on the area, giving more attention to the development of public transport and bicycle lanes, developing a green structure and image for the area, developing an new physical structure with possibilities for high-quality urban housing in higher densities than usual, and finally, mixing housing with other urban functions such as commerce, services and culture.

The UPAT for Tlalnepantla consisted of the following ISOCARP-members  –most of them having also a Chair at a University-:  Ng Wai Keen, urban planner and team leader for this mission (Singapore), Agnieszka Kowalewska, landscape architect (Poland), Ramon Garcia, lawyer (Spain), Hongyang Wang, strategic planner (China), David Guggenheim, architect/urban planner (Israel), Joris Scheers, regional planner (Belgium) and Jan Bredenoord, urban planner/housing researcher (The Netherlands). Young Mexican urban planners assisted the international planning team and did a great job with their supporting activities and their creative input in the discussions. Their names are: Fernando Granados, Daniel Brito, Diana Soto and Cipriano Navarro. The entire planning process was supported by employees of the municipality of Tlalnepantla in terms of content and collecting data and with their great hospitality.

It is expected that the final report of the UPAT team will be available at the beginning of July 2013.

Being part of the Urban Planning Advisory Team of ISOCARP in the Mexican Municipality Of Tlalnepantla de Baz was a rewarding experience.

For this UPAT it was again necessary to use several skills: knowledge of urbanism, graphic representation, an understanding and exploration of the study area and local qualities, getting involved in discussions with prominent planners from around the world and finally materialize all the above in a formal proposal that required hard but satisfactory work.

What I take from my part in this UPAT, is the knowledge that our proposal will be transcendental for the future of the municipality. This workshop is the step beyond the YPP workshop, taking the challenge onto a new level.

The UPAT initiative represents a development opportunity for those young planners willing to engage; it’s full of hard work, sometimes under adverse conditions, but this in itself is what makes it an interesting task.

I openly invite any young (and not so young) planner to become part of this venture that combines youth an experience, concerns and knowledge, hard work and planning, that finally becomes a new stage of development for those involved, municipalities and city planners.