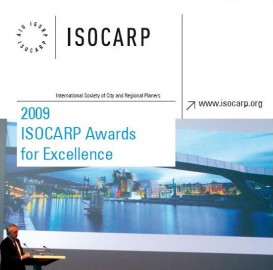 The 2009 ISOCARP Awards for Excellence were conferred in recognition of exceptionally innovative urban and regional initiatives that best expressed the theme of the 45th ISOCARP World Congress on “Low Carbon Cities” in Porto, Portugal. Special emphasis was given to projects recognising the importance and significance of spatial and environmental planning in the era of climate change and globalisation and the participatory planning processes.

The Award Winners were announced on World Town Planning Day on 8 November 2009 in a joint event hosted by GDANSK University of Technology, the City of Gdansk, and the Society of Polish Town Planners (TUP).

The event was marked by:

The winners of the ISOCARP Awards for Excellence 2009 are:

Summaries of the winning entries were published in ISOCARP Review 06.

“Dear Ladies and gentlemen, esteemed winners of the 2009 ISOCARP Award for Excellence, dear colleagues and friends,

In 2005, to mark the Fortieth Anniversary of the Society, the ISOCARP Awards for Excellence were created as the highest honour that ISOCARP can award to a city, region or an institution. The Awards for excellence are conferred in recognition of exceptionnally innovative urban and regional initiatives that best express the theme of the ISOCARP Congress in a particular year.

The selection of the 2009 awards has been done by a jury of 9 members from Europe, North America, South America, China and Africa. The jury consist of ISOCARP members and also of experience from non-members in order to use this knowledge

I would like to introduce the members of the jury shortly:

The jury had a look on many projects, some good projects and view excellent projects. The decision was made to give the 2009 awards to two remarkable projects in China and to a remarkable one in the United Arab Emirates.

Even though there have been quite a lot entries from Europe or North America the jury decided not to award them. It’s not that here are not excellent projects happen, but the most exciting, the most excellent ones are going to be planned and realised in Asia and the Middle East.

It shows also that ISOCARP sets its focus not only to Europe or the US. It shows that Asia and the Middle East are in the focus of our society as well.

The ISOCARP Awards for Excellence are a benchmark of excellent plans and projects. This definition of excellence is based on the “ISOCARP tripple perspective”. That means, one strength of our society is to have the knowledge of our members from practice, from academia and from policy. And we are looking from this trippel perspective, so not a pure research project, not a simple plan or just a policy. An ISOCARP project of excellence has to be excellent in all these three perspectives.

And you have seen the jury, it’s not only representing different parts of the world, it’s also representing members of these three perspectives.

This jury decide to establish three categories for the 2009 ISOCARP Awards for Excellence. They classify the projects on the different levels at which spatial planners work. These three categories are:

It is a matter of course that the awarded projects are based in one of these layers but not limited to them. They are having an integrated approach and not a sectoral one.

On top of this the awarded projects had to have give answers to climate and climate change aspects and link to the congress theme of the this year ISOCARP congress on “Low Carbon Cities”. This congress was successfully held in Porto some weeks ago. And their ISOCARP officially announced the winners of the 2009 ISOCARP Awards for Excellence.

Dear colleagues and friends,it’s a pleasure for me to introduce the winners of the 2009 ISOCARP Awards for Excellence.

After getting the awards out the hand of the ISOCARP president each winner will give a short presentation of their project.

As there will be this presentation one of the projects representatives I will be brief now and concentrate to summarise the most remarkable aspects of the awarded projects.

The 2009 ISOCARP Awards for Excellence in the category “district planning/ urban design” goes to:

Beijing Changxindian Low Carbon Community Concept Plan. Joint Submission by Arup and Beijing Municipal Institute of City Planning and Design — The Concept Plan is a well developed and presented project which utilizes several technical parameters and design criteria to plan and evaluate the overall project objectives. The notion of “low carbon zoning codes” highlights a traditional tool for planning as a means for obtaining current and future sustainability initiatives and goals. The jury considered it an excellent example in district planning/ urban design in response to the global climate change concern and the urbanization pressure.

The 2009 ISOCARP Awards for Excellence in the category “urban/ city planning” goes to:

New Comprehensive Planning of Wuhan. Wuhan Planning and Design Institute, People’s Republic of China. — The “New Comprehensive Planning of Wuhan” is setting the ecological framework for the sustainable metropolis region. The entry shows an advanced technology in problem identification, analysis and presentation. By linking green infrastructures and transportation to skilled strategies, the micro climate aspects, as a local, however internationally important, factor in urban/ city planning, are key elements of sustainable comprehensive planning in Wuhan.

The 2009 ISOCARP Awards for Excellence in the category “strategic/ regional planning” goes to:

Plan Al Ain 2030: Urban Structure Framework Plan. Abu Dhabi Urban Planning Council, United Arab Emirates — The “Plan Al Ain 2030” is an ambitious plan for an ecologically extreme fragile region. It carefully balances between facing globalisation on the one hand and local/ethnical identities on the other by focussing on physical development and environmental concerns. Using a traditional approach the plan combines a strategic consideration based on local identity with a structural framework. The “Plan Al Ain 2030” is considered an excellent example of strategic/ regional planning.

I would like to ask the representatives of the awarded projects to come again to the stage for a photo.

Excellent projects stand on their own and awards are for the winners!

But, there is no harm in reporting on that. Therefore we are glad to have journalists with us and I would like to welcome in particular:

A famous German soccer player said “After the game is before the game”. And this is the same case with the ISOCARP Awards for Excellence.

I would like to use the opportunity to emphasise the call for the 2010 ISOCARP Awards for Excellence which will be opened soon. For the 2010 award we decided to introduce a change in the rules for nomination.

And due to the focus to our members’ knowledge the announcement of the awarded projects will be done during a special event within the next ISOCARP congress in September 2010 in Nairobi, Kenya. And I would like to invite all of you warmly to this event.

It is indented to have the ceremony of the 2010 ISOCARP Awards for Excellence linked with the celebration of World Town Planning Day as we do it now.

The award ceremony and the international seminar tomorrow with other leading keynote speakers like Prof. Scholl from the ETH in Zurich and the Polish Minister of Infrastructure are an excellent way to have this of celebration.

It is a wonderful example that ISOCARP lives by its active members and by remarkable initiatives. And we are looking forward for initiatives to host the ISOCARP celebration of the World Town Planning Day next year.

Before giving the floor to open the dinner I would like to thank on behalf of ISOCARP our Polish hosts: