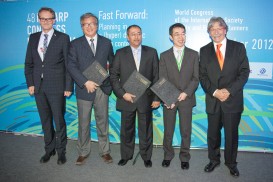 ISOCARPs aim is to generate and share knowledge. We have several ways to do so in our society such as UPATs, YPP workshops, publications and of course our annual congress.

One certain way are our awards and in particular the ISOCARP Awards for Excellence. This award honours excellent planning activities which are best or better to say excellent practices.

ISOCARP intends not only to honour the planning projects, by the Awards we intend to stimulate the projects as well.
There are several examples of this stimulating process. For example the Wuhan Masterplan which was awarded in 2009. This initiated a discussion and working process which finally took us to Wuhan with our congress last year.

Another example is the project “Rahat – Planning the Largest Bedouin City in the World” which won an Award for Excellence last year. Receiving the Award gave an enormous push to this project.

Through the echo in media Amos, who is the project leader and recited the Award, received an invitation from Shimon Perez who invited him to present the project in the president’s office. This political backup pushed the project. And Amos told me that he gets requests for interviews from several TV stations in Israel but also from the US and other parts of the world.
Winning an ISOCARP Award for Excellence brought his project fast forward.

Ladies and gentlemen, It is my pleasure now to officially announce the winner of the 2012 ISOCARP Award for Excellence. This year we had an intensive discussion in the jury which had the pleasure to evaluate high quality applications. And three of them were more than just high quality, they were excellent. Excellent in the way how they address the particular planning subject and excellent in the planning process.

The intention of the jury was to award projects each on the level of urban quarters, cities and regions. But it turned out that the evaluation brought out very clearly three projects which will be awarded in the next couple of minutes, even if they do not fit in the intended award categories. In the end the jury decided to give clear excellence more weight than fixed categories.

All three projects are excellent examples of fast forward planning in different types. Such as disaster recovering planning or raid growth.
The projects as such will not be presented tonight. You have seen them in the exhibition. And you can learn about them tonight right over there.

Ladies and gentleman may I ask for your attention now for the award winners 2012.

Call for 2021 Awards for Excellence!