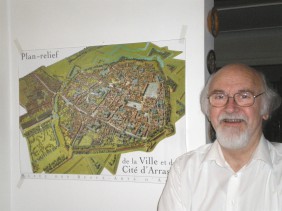 On 7 December, our Society lost one of its most dedicated and long-standing members when Bill Twitchett died of cancer in hospital in Bapaume, France.  He was 82 year old, and although born in Australia he spent most of his life living, working and studying in France.  His connection with ISOCARP began in 1969 when he attended the Dusseldorf Congress. In 1972 he was actively involved in the Goteborg Congress (Visual Qualities of the Built Environment).  The ’72 Congress was the first of many such events in which he participated officially – often taking a significant role: convening a workshop,  chairing a session ,  or contributing  a learned paper. In Gelsenkirchen  in 1999 Bill filled the onerous role of General Rapporteur  on the Congress theme of The Future of Industrial Regions –  and most recently he was ‘Master of Ceremonies’ for the opening session of the 2013 Congress in Brisbane.  In total he probably attended at least 25 Congresses during his long career.

Bill loved Australia (his home country);  and he certainly  loved France (his adopted country).  But in his heart of hearts he was a true ‘citoyen du monde’ .  When he was not practicing his profession as an architect – planner he was always thinking, researching and writing about urban regions worldwide.  His thesis for a Doctorate at the Sorbonne was completed in 1995. Its short title of Le Site Urbain; Potentialities does not tell us much; but the sub-title is more definitive: Reflexions sur le developpement  responsable  et  equilibre des etablissements  humain a partir de six exemples Francais, Egyptiens et Australiens. This extraordinary work ran to almost 400 pages and was in effect his greatest professional achievement. Unfortunately it has never been published.

Bill grew up in a small town in northern New South Wales – a member of a very extensive family whose members scattered themselves around Australia and with whom he kept in touch throughout his long, productive and adventurous life.  I use the word ‘adventurous’ here in a special sense. Bill did not climb mountains or explore glaciers. But he did climb mental heights and was always out to explore new ideas –and debunk old ones. From a first foray into pharmacy in Queensland, he moved to Sydney and the University of NSW where he studied architecture, performed in student dramatic  productions,  went horse-riding at weekends, got casual jobs to keep the wolf from the door.  He graduated in 1960. As was the case with so many young Australian architects of his generation (including myself) he travelled to Europe in the early ‘60s and found a place at the Atelier Tony Garnier de l’Ecole Nationale  Superieure des Beaux Arts in Paris. In 1967 he obtained his Diploma at l’Institut d’Urbanisme at the University of Paris, Sorbonne. Whilst living and studying in Paris he met his future colleagues in the consulting studio ACTUA ( Atelier  Cooperatif  Technique  Urbanisme  et Architecture ) which was established in Paris in 1977. His link with ISOCARP (AIU) commenced with his attendance at the 1969 Congress in Dusseldorf.

In the 1970s his work for the Catholic Church took him increasingly to the Pas-de-Calais region in France, and his connection with the Centre de Culture et Foi in Arras became very strong.  From his office in Lens he served church and civic clients throughout this extensive region. And when he was not attending to the needs of his clients he was quietly and diligently building his research library and his interests in regional studies to the point where his Association Le  Pavillon and its program Terre et Cite  was eventually established in Arras, based in the Maison Diocesaine in rue d’Amiens. Over the past 2-3 decades Le Pavillon has established a reputation it is region for creating programs and organising events which are centred on the inter-related themes which were central to Bill’s life: the links between towns, cities and region; the cultural and spiritual links which are associated with regionalism;  and of course, the need to approach these themes from a global humanism perspective.

Bill returned to Australia whenever he could – and always made the most of the experience in both social and professional terms. As recently as 2013 he travelled for 3 months throughout the length and breadth of the country – in trains, buses, planes, cars, ferries, and on foot!  His prodigious knowledge of the history of human settlement in Australia was enough to shame many of his Australian colleagues (including myself). His inquiring mind took him into many fascinating corners and relationships; but whilst he was always learning he was also giving. And to his great credit he never abandoned his lifelong interest in Aboriginal affairs and the sad plight of the Aboriginal people in modern  Australia. As recently as October this year in Paris I was discussing these very matters with him during what was to be our last dinner together.

Bill leaves behind a global network of relatives, friends and colleagues.  Without doubt he was a very dedicated ISOCARPian and a role model for those who try to engage with affairs beyond their own parochial horizons to a wider, wiser and happier world.  His extraordinary research archive and professional library remains with the diocese in Arras for the time being; their future remains somewhat uncertain.  Perhaps ISOCARP might have some ideas.  As for his two domestic cats – Melchisadek and Mathilde – they probably preceded him to his place in the heavens.