After returning from the Middle East team leader Jeffrey Featherstone was interviewed by The Reporter Online about his recent experiences in the ISOCARP & UN-Habitat West Bank UPAT workshop. This article was published in 15 newspapers in the US.

Editor’s Note: Beyond the Classroom is a series that highlights unique, local educators, who through their own experiences, passions and ingenuities seek to teach and inspire others. 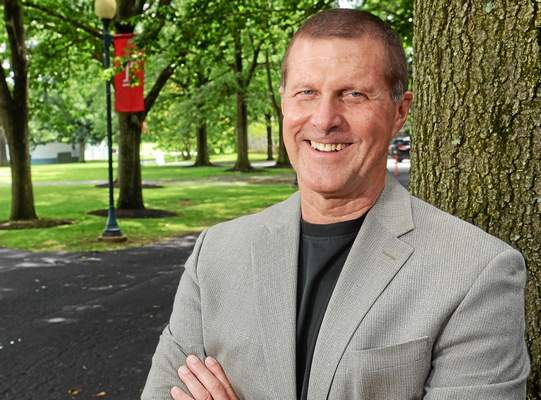 Upper Dublin >> He served as a member of the Long’s Peak Working Group — an advisory body to former President Bill Clinton on national water policy and sustainability issues. He was a member of the U.S. Water Resources Delegation to China and was the deputy executive director of the Delaware River Basin Commission. Dr. Jeff Featherstone, the director of the Center of Sustainable Communities at Temple University and a professor in the Department of Community and Regional Planning, is an expert in city planning, but a recent United Nations-sponsored trip to the West Bank appeared to be one of his most challenging planning endeavors yet.

Seated behind a desk in his office in West Hall at the Temple University Ambler campus, Featherstone chronicled his nine-day sojourn to the West Bank from June 6 through 14 with a team of city planners from around the world as part of a special UN project. He described the West Bank as an arid land riddled by conflict between the Israeli and Palestinian peoples — a conflict that has been going on for thousands of years. He also described it as a “segregated society,” where the two people groups coexist, but don’t integrate. “Palestinians have green license plates; the Israelis have pumpkin colored license plates,” he said. “You see two different societies on the West Bank. They are people who don’t commingle at all. They don’t desire to.”

A member of the International Society of City and Regional Planners, Featherstone headed a team of five hired by the UN in cooperation with the UN-Habitat and the UN Development Programme to design a “spatial vision” that “would create, free and open borders in the Palestinian territories,” he said. They would work with another ISOCARP team stationed in Gaza and meld their ideas. To tackle this task, in a region that has been ravaged by conflict, was no small feat, Featherstone said.

The West Bank, which is located east of Israel and west of Jordan, is approximately 3,000 miles and is composed of about 2.5 million people, he said. Two major events that have defined the Israeli and Palestinian divide were the Arab-Israeli War of 1967 where Israel gained control of Gaza, the Sinai Peninsula, the West Bank, East Jerusalem and the Golan Heights and the 1993 Oslo Accord.

Featherstone’s team focused on Ramallah, Bethlehem and Jericho — Palestinian-controlled areas of the West Bank, which were allocated in the Oslo agreement. One of the major revitalization recommendations the teams presented to UN and Palestinian officials at the end of the trip was a rail system that would connect Ramallah to Bethlehem with a transit system that would eventually branch off to urbanized areas of the three cities and possibly expand to connect the West Bank to Gaza, Featherstone said.

“If you’re Palestinian and you live in Bethlehem and you work in Ramallah, which is like driving from Media to Ambler, it would take (more than) two hours to make that commute,” he said. “They drive to the edge of East Jerusalem and have to get out of their car. In order to get through East Jerusalem, they would need to have someone with an Israeli license plate to get them through.” Mobility in the West Bank is heavily restricted, with Palestinians having to acquire military issued permits to move between certain cities, he said. In addition, the West Bank has more than 500 roadblocks, checkpoints, gates and other barriers to restrict their mobility, he said.

The Israeli military has also created a separate system of roads, many of which were built for Israeli settlers, allowing them to move freely between the West Bank and Israel, he said. “This could work with the Israeli transit system,” Featherstone said. “There are several existing lines we could connect to. There could be a line going from Tel Aviv to Jerusalem and you could run the same line from Jerusalem all the way to Amman. That would integrate the economies of the region. This could be a thriving economic powerhouse if it wanted to.”

To implement a transit system like this would take billions of dollars and about 5 years, he said. Not to mention, getting Israeli and Palestinian officials on board. To connect Gaza to the West Bank would involve entering into Israel. Featherstone said a regional coordination group would need to be established to facilitate conversations between the municipalities in the region. Featherstone is currently working on a news article for the UN detailing the integrated transit system, as well as other recommendations, such as ways to increase the green infrastructure in the cities. There are rarely any parks or outdoor spaces for people to enjoy, he said. He could be invited to do further work on the project, but all that’s up in the air, he said.

The trip was research-intensive and complex, but Featherstone said he came away with a deeper appreciation of living in a mobile society. “We take mobility for granted in the United States — we can come and go and move wherever we want,” he said. “For Palestinians, their world is very limited. The importance of mobility is something I have learned to appreciate a lot more.”