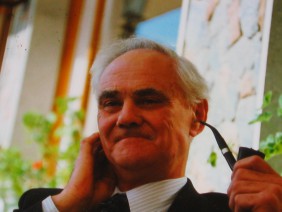 On 7 February former ISOCARP President Derek Lyddon passed away at the age of 89.

Derek was architect planner in Coventry and Belfast, but his true vocation was his work as Chief Planning Officer at the Scottish Development Department where he worked from 1967-1985. He was a key person in Scottish planning. He was Chairman of the RTPI’s International Affairs Board and Honorary Fellow of the Royal Geographical Society.

From 1981-1984 Derek was ISOCARP President. At that time ISOCARP had 320 members worldwide. Derek was facing the question whether to increase membership and maybe lose the element of informality and friendship which were ISOCARP’s hallmark. Should the society concern itself with work that interests the existing members or should ISOCARP treat subjects which attract the support of other international organisations?
Derek’s aim was not to go to extremes, not to go too wide too quickly, he was a man of balance. He wanted to keep the activities in scale with the wishes and abilities of the members and gradually attract new members from underrepresented countries.

Under Derek’s presidency the ISOCARP Bulletin started and was only discontinued in 2000. In 1991 Gerd Albers became editor of this Bulletin. Derek established first contacts with UNCHS and in 1983 ISOCARP was admitted to the NGO status B in UNESCO.
Together with Adriana Dal Cin Derek initiated the International Manual of Planning Practice (IMPP) of which a new edition will be published this year under the editorship of Judith Ryser and Teresa Franchini.

Beside all his professional achievements there is his personality. Gerd Albers called it ‘Derek’s clarity of thought, his unshakeable equanimity, his sense of humour’ that made him so special. He was an intellectual who never lost his sense of reality. At the same time he enjoyed writing limericks and having fun with his colleagues. The mixture of seriousness, ease, humour and decisiveness made him unique.

ISOCARP owes a lot to Derek Lyddon. He will be deeply missed.