David Prosperi passed away on 4 August 2014 after having two heart attacks within a few days. He was 65 years old.

David was Professor of Urban and Regional Planning at Florida Atlantic University with a specialization in urban and regional theory and particularly in the use of systems and critical methods to understand, evaluate, model, create, and plan emerging urban regions.  He was Editor of two international journals, including service as founding editor of the Journal of Planning Education and Research.

Planning Education was his passion. For the 50th ISOCARP Congress taking place in Gdynia, Poland, in September this year he again prepared an education forum. This year it will focus on the topic of Bridging Theory and Practice: Implementation.

He had a great influence on his students, he challenged and encouraged them. He was an inspiration for several young ISOCARP members whom he mentored and helped finding their way in the planning world.

David was a respected member of the Executive Committee of ISOCARP, a man who with his knowledge, enthusiasm, spontaneity and intellectual honesty has inspired many of his ISOCARP colleagues and friends. He often looked at things from a different angle, and this frequently was the angle everyone else had overlooked. We will miss his vision for the Society.

We lose a great colleague and friend. David will be deeply missed but always remembered. 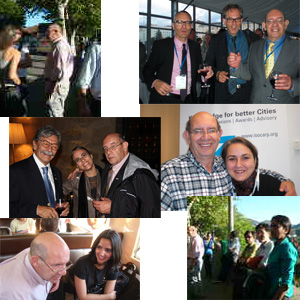 Call for Participants: International Workshop on Revisioning Peripheral Geographies In The Global South

Register for Online URBAN TALK: Opportunities & challenges for urban health and well-being in a COVID environment