This year 2015 it is 50 years ago that ISOCARP was founded.
A reason to look back and reflect, but also to celebrate and look forward!

Download the Revue de la S.F.U. about the Foundation of ISOCARP, January 1965. 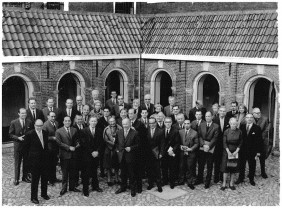 The 50th Anniversary Celebrations were launched during the 2014 Congress in Gdynia, Poland. With the help of the members it was possible to organize events and other activities the whole year through. The celebrations culminated in the 2015 Congress which was held in The Netherlands, where ISOCARP was founded in 1965.

In today’s changing world a society as ISOCARP with committed members from academia, government and the private sector is needed more than ever.

Several National Delegations got involved in the different activities in their cities and regions.
Thank you very much.

To learn about the Anniversary Projects in more detail, explore the sub-themes below:

In his paper ’50 Years ISOCARP, Past, Present, Future – Development of Planning 1965-2003′ Max van den Berg, ISOCARP President from 1999-2003, sketches the evolution of the spatial planning issues during 50 years in relation to the changing context and the role and activities of ISOCARP.

Make a Donation to ISOCARP

It may be tax deductible! Donations to ISOCARP can be deducted from taxable income by residents of the following countries: Belgium, France, Hungary, Ireland, Luxemburg, Netherlands, Poland, Romania, Slovakia, Switzerland and United Kingdom.

50th Anniversary Celebrations in the Press